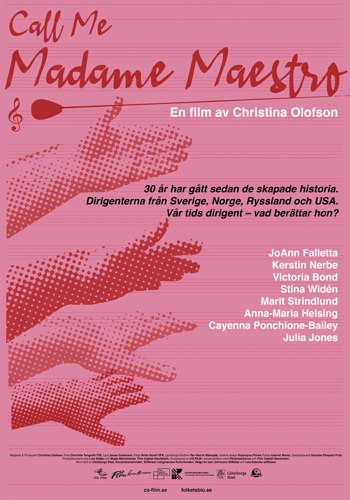 30 years ago, the Swedish filmmaker Christina Olofson produced and directed the award-winning documentary A WOMAN IS A RISKY BET (DIRIGENTERNA) about women orchestra conductors from all over the world. This film was sold to television in many countries including the BBC in the UK. These women had one thing in common in this male dominated profession. They were driven by self-belief and a strong passion for music and a desire to conduct concerts and operas. To succeed they also needed to be better than the average male conductor. Several opera houses at that time did not want a woman conductor.

What has happened during the past 30 years? Any improvements? In a follow-up Christina Olofson has now made a new feature length documentary CALL ME MADAME MAESTRO. We follow Kerstin Nerbe (Sweden), JoAnn Falletta (USA), Victoria Bond (USA), Cayenna Ponchione Bailey (Oxford UK), Julia Jones (UK), Anna-Maria Helsing (Finland), Marit Strindlund (Sweden). Things have improved. There are not many but more women conductors. Now it does not matter if the conductor is male or female as long as it is good. Now nobody can say that they do not want a woman conductor but they can still do it!
So the fight is still on.